Went to a bread baking class today at the Stone Turtle Baking and Cooking School.  Michael and Sandy Jubinsky are two people who love what they do.  For 30+ years Michael was the spokesperson for King Arthur Flour and in 2011, he was voted one of the ten best bread bakers in America.  He knows his stuff.  www.stoneturtlebaking.com 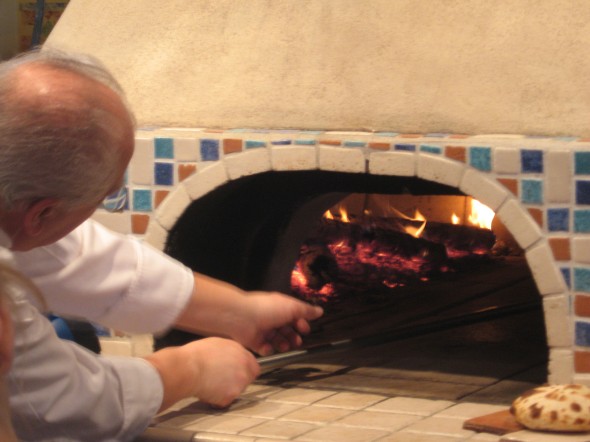 Michael is retired, and in a typical fashion up here, going stronger than ever.  He and Sandy built a home, a classroom/bake shop and an awesome wood-fired Le Panyol Stone Oven from France. Stoking the fire with kiln-dried oak (4% moisture) and maple hewn from his property, the oven burns up to 1079 degrees at the dome, 982 degrees on the floor and and produces bread with crust and crumb to die for.

There were ten students in the class.  We each made two loaves, 700 grams each with approx. 64% hydration (ratio of water to flour), proofed, stretched and folded three times, then ultimately shaped into a boule and placed upon a bread peel.  The oven had cooled to just below 600 degrees, and the bread baked for 16 minutes.

We each had a special marking pattern.  My two loaves are in the photo to the right, below. 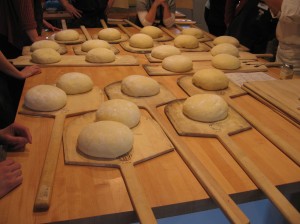 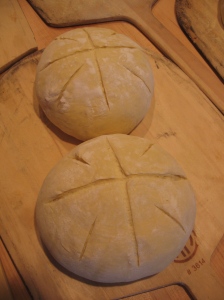 The 64% hydration is somewhat “moderate”; Stephen Lanzalotta, a local baker, makes breads upwards of 85% + hydration – rather like pancake batter – that he kneads by hand, slowly forming the gluten strands that bind and form a superb crumb; his bread lines stretch out the door, buyers waiting up to an hour to purchase his breads.

Of late, wood-fired ovens are the vogue, but they have been around since at least 300 BC when the Greeks enclosed fire within a flame-resistant mortar shell.  But history here is moot; what matters today is crust and crumb: 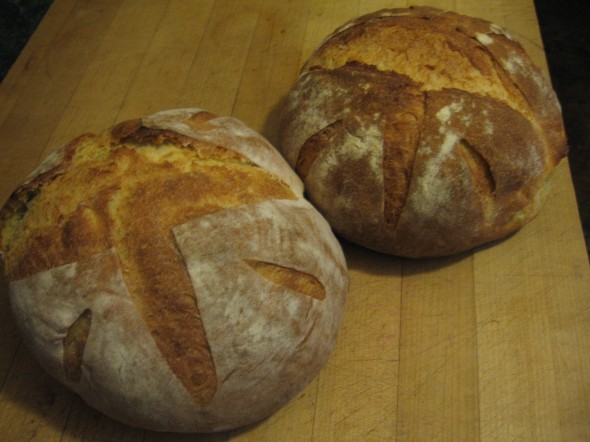