Getting the Lead Out (phytoremediation)

When we purchased our home, it was the land I valued as the key asset.  Our first soil test brought the stunning news that lead in the soil averaged 480 parts per million, a level classified as “move garden to uncontaminated soil.”  We got busy researching, and learned that Helianthus annus, the common sunflower, will draw the lead out of the soil. 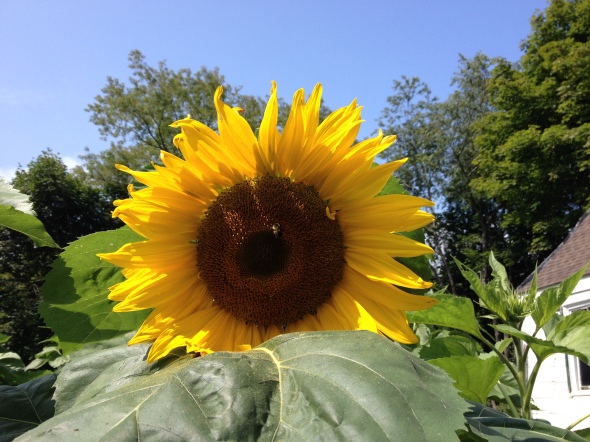 With that shot of enthusiasm we got to work amending our land.  In the autumn of 2013 we sheet mulched a large space in our sun-drenched front yard; we call this the mandala garden.  On top of a thick layer of cardboard, we piled rock dust, aged manure, chopped leaves and perennials, and clean top soil: the pile was about 14″ high. 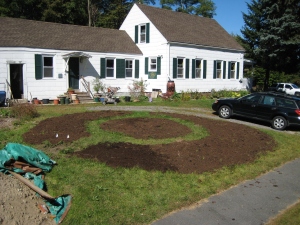 By the spring of 2014 we tested the soil again and this area – far enough away from our house to be out of reach of lead paint chips – showed a level of 280; better but still too high to grow leafy or root vegetables.

We sowed many seeds of Titan, Russian, and Red Pilsen sunflowers and let nature run its course.  When we cut down all the sunflowers we disposed of them; you don’t want to compost those! 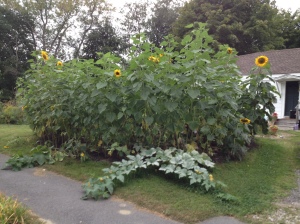 This spring our soil test showed 215 ppm, which is classified as a “slight” contamination but still is a major step forward.  We continue to add compost, but we grew fruiting vegetables this summer.

And some sunflowers just for good measure.

This year we grew Good Mother Stallard pole beans for the Seed Temple in Estancia, New Mexico <followthegoldenpath.org>.  Our first time growing pole beans, I wasn’t sure how to dry them.  While I researched, Ella walked into the garden, plucked from the vine one dried pod, pulled it apart, and…VOILA!…green beans had turned a gorgeous mottled red.  Exquisite, fascinating, and a great shared lesson in seed saving.

We planted ten seeds and now have ten x ten x…an abundant cache to send back, to share with friends, and to sow next season.

Chef’s Garden at the Inn

A concise 6-month history of the Chef’s Garden:  in January, on the cold grey day of my first visit to Chebeague Island, I stood on a lawn at the Inn and was asked there to create a Chef’s Garden. 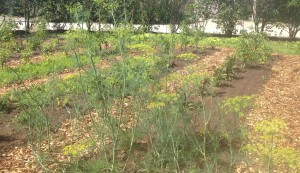 In March, enthusiasm was high.  The chef offered his list of desired plants and my friends at Frinklepod Farm, Noah Wentworth and Flora Brown,  started the vegy, herb and flower seedings; David Buchanan, of Portersfield Cider, shared advice on berries and stone fruits; Nance Klehm, from the Seed Temple in Estancia, New Mexico, sent seeds of the 4 sisters: Corn, Pole Beans, Winter Squash and Sunflowers.

In April, Chuck Varney, of Second Wind Farm on Chebeague Island, plowed and turned the sod, we amended the soil, and then tilled to break the clumps.  We had neither time nor materials to sheet mulch; on the island, bulk compost and mulch are available only if barged over in a dump truck, so we have worked with the soil at hand.  The ground laid fallow a few weeks and then we worked our way across the field picking out roots and clumps of dried grass.

In late-May, on a rain-drenched day, Noah and I hauled across the bay crates filled with the starts and seeds: japanese eggplants, red and white onions, varieties of tomatoes, peppers, butternut and buttercup squash, bush beans, radishes, carrots, beets, slicing cucumbers, and a potager’s array of herbs and flowers.  Some seeds failed to germinate.  Some plants have been slow to take root.  Overall, the garden is flowering and fruits are forming on the vines. 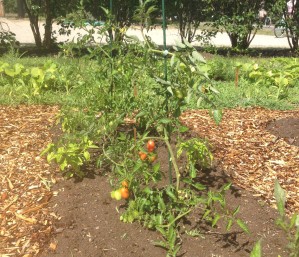 The chef has said that he walks through the garden to relax during long days in the kitchen.  Today, he harvested eggplants, peppers, squash blossoms, herbs and edible flowers for this evening’s menu.

How wonderful to see an idea coming to fruition, and to know that customers have been fed from our shared efforts.

From Tree to Table 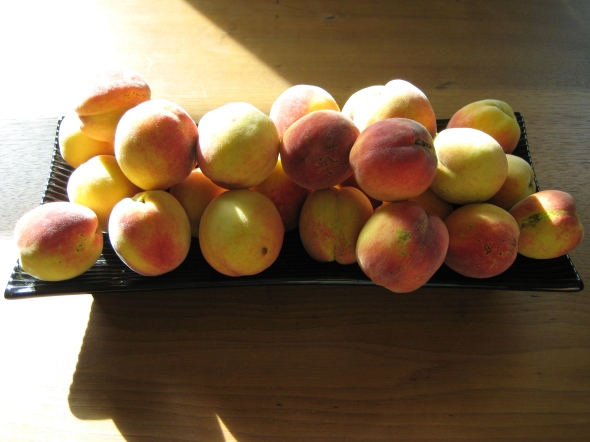 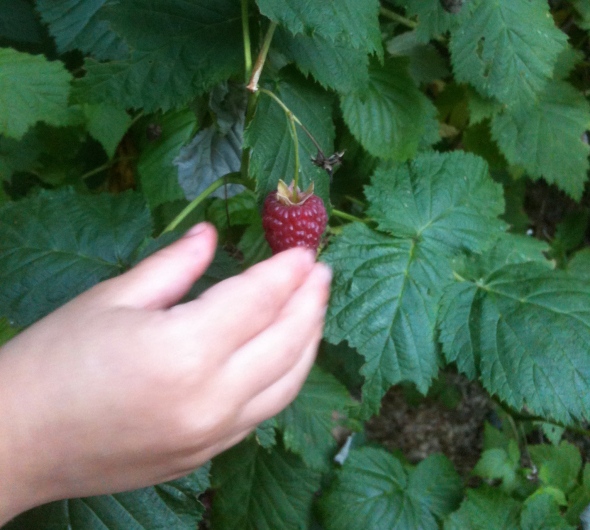 Last night, as we prepared to eat dinner on the porch, our neighbor Steve came walking down the magical path to our house.  He told us that there was at least one quart of red raspberries waiting to be picked on the canes growing behind his house.  That was a call to arms!

Our four-year old daughter E loves picking berries, and so this offer was the equivalent of Halloween and Christmas combined, in August.  We quickly finished our dinner and then E and I ran down the path to Steve’s house.

Like little Sal in the famous story “Blueberries for Sal,” E eats 10 berries for every one she puts into the bucket.  Which was not a problem here.

Before too long, she decided to run back home while I continued to fill up the bucket.  There was blueberry pie waiting for dessert.  Early August in Maine! 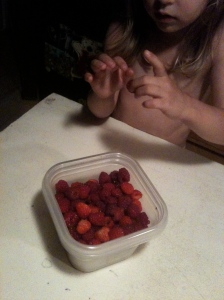 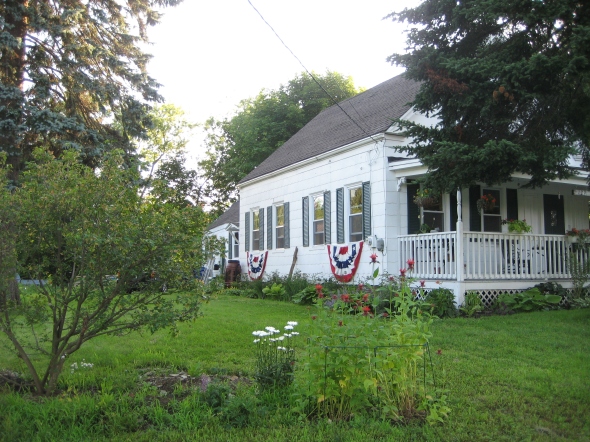 …for us: self sustaining, small footprint, resilience, listening to the land, freedom of choice and teaching our children about consequences, being connected to community, sharing our surplus, growing forward.

Petrokus was our family’s pig.  Well, half the pig was ours.

On a rainy saturday, one week ago, he was loaded into a trailer and I told my daughter E, “He is going to another farm.”  That was true, by half.  “Why?” she asked.  “Well, he has gotten too big for Dan’s farm.”  That was completely true.  He had grown to almost 400 pounds.

He spent the weekend in that trailer, at the other farm, until Monday when he was taken to the slaughter-house.  I wasn’t sure how to broach that topic with E so I had punted.  But this morning, we made the long drive up to West Gardiner Beef.  We loaded the car and headed back home.  I felt it was time to talk about our payload.

Of all the “big” conversations I might have with my children, I would anticipate the topics of sex and drugs.  The source of our family’s food, however, would hardly seem to belong on that list.  But I was feeling pretty uneasy.

We are trying to live as close to the land as practical, and when friends offered to co-raise a grain-fed hog, that was a welcome opportunity.  I love pork: braised, brined or roasted; pan seared or smoked “low & slow”; dry rub, salt cure, wet mop – whatever the manner, I love it all.  My daughter does too.  Becca is sure this gene was inherited from my side of the family.

We visited Petrokus during the summer.  We talked about him when we purchased grain at the feed store.  We touched upon the idea that Petrokus would provide our family with food.  We want our children to know their food and its source.  The issue of slaughtering may very well have been my own.

On the way to the slaughterhouse, I had told E that we were going to get some meat.  Now I needed to add some details.  I eased into the conversation.

I pondered that phrasing.  Was it better, clearer to say “…is Petrokus” ?  I distanced the animal and the act by inserting “from.”  I continued, “He gave his life, gave us food.”

Silently, she looked out the window at the bare trees.  I did not want to rush the conversation so I gave the silence plenty of time.

The topic of “hurt” is commonplace in our conversations.  She might ask if a pencil hurts paper when she makes marks, if it hurts a carrot when she takes a bite, if it hurts a tree when the winds blow.  “Hurt” is her three-year-old variant of “Why?”  So her question was not as loaded as it might seem.

I thought about Chuang Tzu’s zen tale of the butcher and the oxen.  At first he “saw the Ox as one mass.”  With experience comes insight and then “My whole being apprehends.  My senses are idle.  The spirit free to work without plan follows its own instinct, guided by natural line, by the secret opening, the hidden space, my cleaver finds its own way.  I cut through no joint, chop no bone.”

What I said was, “The butcher did his job well.  So it is okay.”

“It is sacred,” I continued, “when an animal gives its life to feed us.  We are thankful.”

Her thoughts drifted to her new-born brother.  “Will we be able to share this delicious meat with Milo?”

It must be in the genes!  “Yes,” I said, not opening the question of how long before a newborn could be fed pork.

In silence, she looked out the car window.

Then finally, “Will we have another pig next year?”

So our conversation passed without trauma.  Or perhaps this is just the first phase of a long ongoing conversation, with changing feelings, about the source of our food.  Certainly she will have much to say on the topic.

For the record, here are some facts about the fattening of Petrokus:

– purchased the suckling pig on 1 May, approx 18 weeks old;

Apples are a staple of New England and I took this afternoon off from the house project to press apples for cider.

At my day job, I tend an orchard of 100-year old apple trees, a mixture of Cortland, Macintosh, Golden Delicious and some unidentified astringent varieties.  While not good for eating, the astringent are excellent in cider, adding a complexity to the flavor.

I pressed the apples over at my friend David Buchanan’s farm in Pownal Maine.  David has recently had a book ‘TASTE Memory: Forgotten Foods, Lost Flavors, and Why They Matter” published by Chelsea Green Publishing in Vermont.

David is a serious cider enthusiast and has a first-rate operation.  The first step is grinding the apples.  In the photo below you can see the drop shoot, motor and receiving bucket of the grinder.

The mash is then placed into the water press.  The press has a water bladder in the center of a round metal colander.  The apple mash goes inside the colander and the valve is opened, filling the bladder with water.  The pressure forces the apples against the metal colander, crushing them and extracting the juice.

The pomace – the mass left over after the juice has been extracted – was cleaned out and scattered in the woods for the deer.  Nothing was wasted.  We pressed 8 bushels and got 18+ gallons of juice.  It is absolutely delicious!

no blight this year