“I want to live in a society where people are intoxicated with the joy of making things.”

“…the softly focused gaze of Pissarro…”

Posted: July 2, 2011 | Author: becca neumann | Filed under: Art & Healing, Farming off the Farm, What is an Art Farm | 1 Comment
Our friend Dave Hopkins sent a note of encouragement and his comments on Camille Pissarro struck a chord.  Dave lives along the watershed of the Deerfield River in Western Mass.  His footprint is light: solar panels on the barn, on sunny days, generate more power than they consume – they are feeding back into the grid – and the humanure is composted into fertilizer, amended back into the soil to nourish the vegetables, and in turn the animals and humans.  It’s an integrated set-up.  His work with the land has inspired us as much as the ideas he has passed our way.  By his permission, we post his comments here.  On a note of serendipity, this work by Pissarro, from 1886, is titled “Apple Picking.”  That works for us.
“Good to hear from you!  I read some articles in your blog and found it very interesting indeed. Love what you and your family are doing to raise your own food.
I’m musing on an article now on Camille Pissarro, the Impressionist painter and anarchist who had a immense passion for agriculture and rural life. Saw a wonderful exhibit of his work at the Clark in Williamstown, MA, and I strongly recommend it if you come to Western Mass. this fall. It runs to Oct. 2. I realize that what you’re doing is, on the surface, different, but Pissarro believed that modern industrial civilization would collapse and we would return to a living, local, agriculturally based economy, without hierarchy and without a central state. I’ll be talking about how the softly focused gaze of Pissarro was a kind of revolutionary act, rejecting the eye-intense, hyperfocused, hypercontrolled  mindset of modern Western civilization. These farm workers have a quiet dignity and are one with the earth. 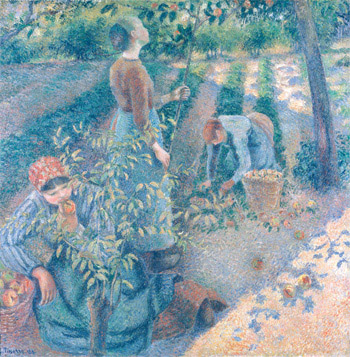 All the best in your endeavors!
Dave”

Ananda K. Coomaraswamy: “A Figure of Speech or a Figure of Thought?”

“Plato, for example, remarks that ‘the expert, who is intent upon the best when he speaks, will surely not speak at random, but with an end in view; he is just like all those other artists, the painters, builders, ship-wrights, etc.’ and again, ‘the productions of all arts are kinds of poetry, and their craftsmen are all poets,’ in the broad sense of the word.  ‘Demiurge’ (demiourgos) and ‘technician’ (technitnes) are the ordinary Greek words for ‘artist’ (artifex), and under these headings Plato includes not only poets, painters, and musicians, but also archers, weavers, embroiderers, potters, carpenters, sculptors, farmers, doctors, hunters, and above all those whose art is government, only making a distinction between creation (demiourgia) and mere labor (cheirourgia), art (techne) and artless industry (atechnos tribe).  All these artists, insofar as they are musical and therefore wise and good, and insofar as they are in possession of the art (evtechnos, cf. entheos) and governed by it, are infallible.  The primary meaning of the word sophia, ‘wisdom’ is that of ‘skill,’ just as Sanskrit kausalam is ‘skill’ of any kind, whether in making, doing, or knowing.”

What is an Art Farm?

These days with lots of attention to localvore culture, “know your food, know your farmer,” food politics, etc, the link between art and agriculture seems less often explored, rarely celebrated.  We began musing on this theme in ’01 while living on Chicago’s North Side (population density of >4,500 people per square mile) and later in ’06 when we settled in Maine (population density of 41 people per square mile).  Big change in surroundings.  No change in interest.

Along the way we heard about Farmer John at Angelic Organics, about the folks at the Wormfarm Institute (two sculptors who left Chicago to farm in southern Wisconsin), and the Bread & Puppet Theatre that ends each performance by sharing with the audience bread made by the cast and crew.  Nance Klehm, a farmer, forager, social ecologist and good friend, in ‘08 taught a class at the UCLA School of Art on the topics of: “place and participation (or which of these bugs are edible?)/cultivating knowledge, participation, food in the age of monoculture/practical and critical processes for the hungry, lost and restless.”  A Google search now brings up numerous sites under the term “art farm.”

Something is up.  And still it is hard to wrap our mind around what is an art farm.  More readily, we can say what it is not: neither a “get big or get out” USDA sanctioned operation, nor the world of Art as an insurable, bankable asset.  But that doesn’t tell us much.  Stating the affirmative, we could say this is equal parts “Cheap Art Manifesto” (see blog of 19 May) and a hands-in-the-dirt connection to the earth and ourselves.

Art-making is a behavior.  Hard-wired into our DNA, it is a biological inclination.  In a nutshell, this is the argument put forth by Ellen Dissanayake in her book What Is Art For?: “My own notion of art as a behavior…rests on the recognition of a fundamental behavioral tendency that I claim lies behind the arts in all their diverse and dissimilar manifestations from their remotest beginnings to the present day.  It can result in artifacts and activities in people without expressed ‘aesthetic’ motivations as well as the most highly self-conscious creations of contemporary art.  I call this tendency making special and claim that it is as distinguishing and universal in humankind as speech or the skillful manufacture and use of tools.”

What if art-making is not an attribute of society, but antecedent to society.   Could it follow, then, that agriculture emerged as a “making special” adaptation?  Are we putting the horse before the cart?  These are questions we strive to grasp.

An art farm is about “place and participation” where obstacles become opportunities.  We live in a rented house in South Portland, Maine.  When our landlord said we could not have a garden, we made arrangements to plant a shared garden at the home where our daughter goes for day-care.  And from that place we are now harvesting greens that feed our family.  A few miles away, down by the Marsh, with Farmer Martha we are raising hens and, soon, broilers, and from the orchard, come autumn, again we will pick apples, press cider, make cobblers and applesauce.  With a lot of sharing and creativity we are making do with what we have.

And as we go forward, we will tell the tales, share the stories and paint the pictures here at our blog, while the answers work themselves out.  They always do.

Ellen Dissanayake: “What Is Art For?”

My own notion of art as a behavior…rests on the recognition of a fundamental behavioral tendency that I claim lies behind the arts in all their diverse and dissimilar manifestations from their remotest beginnings to the present day.  It can result in artifacts and activities in people without expressed ‘aesthetic’ motivations as well as the most highly self-conscious creations of contemporary art.  I call this tendency making special and claim that it is as distinguishing and universal in humankind as speech or the skillful manufacture and use of tools.

Making special implies intent or deliberateness.  When shaping or giving artistic expression to an idea, or embellishing an object, or recognizing that an idea or object is artistic, one gives (or acknowledges) a specialness that without one’s activity or regard would not exist.

…From very early times it seems evident that humans were able to recognize and respond to specialness – at least this would seem to be the explanation for Acheulean people of 100,000 years ago selecting a piece of patterned fossil chert and flaking from it an implement that utilized the pattern, or carrying about with them an unusual but “useless” piece of fossil coral.

…Perhaps the proclivity to make special existed even a quarter of a million years ago in the use of shaped pieces of yellow, brown, red, and purple ocher found among the human remains in a sea-cliff cave in southern France.  It might be supposed that these were chosen for the “special” color, and thus suitable for “special” purposes (Oakley, 1981).  Red haematite was brought from a source twenty-five distant toan Acheulean dwelling site in India, probably for use as a coloring material (Paddayya, 1977).  The presumably very ancient practice by humans of applying ornamental designs to their bodies can be interpreted as a way of adding or imparting refinement to what is by nature plain and uncultivated, of imposing human civilizing order upon nature – that is, making special.

Recognizing the ubiquity of making special, and its apparently effortless integration into the day-to-day life of many unmodernized societies (so that the sacred and profane coexist, the spiritual suffuses the secular), points out to us the degree to which art is divorced from life in our own society.  It helps us to understand why art, which according to the modern notion is autonomous and “for its own sake,” is still conceptually stained with the residues of essential activities and predilections.

From an ethological perspective, art, like making special, will embrace a domain extending from the greatest to the most prosaic results.  Still, mere making or creating is neither making special nor art.  A chipped stone tool is simply that, unless it is somehow made special in some way, worked longer than necessary, or worked so that an embedded fossil is displayed to advantage.  A purely functional bowl may be beautiful, to our eyes, but not having been made special it is not the product of a behavior of art.  As soon as the bowl is fluted, or painted, or otherwise handled using considerations apart from its utility, its maker is displaying artistic behavior….  The housewife who puts down cups and plates any which way is not exercising artistic behavior; as soon as she consciously arranges the table with an eye to color and neatness, she is doing so.  The functional, empty, unremarkable wall may be enlivened by a mural, or bas relief, or even graffito.