“The Power of Play”

A couple nights ago when I was doing my part of the new night-night routine (reading stories from my post in bed) my daughter and I decided to make a bandage for one of her doll’s legs. The bandage on my leg is fairly large and my daughter has been told to stay clear of it. A bandage on her doll’s leg would be ok for her to touch and manipulate as she wants. With my husband’s help, we gathered some cotton balls, paper towels and tape.

Little one was so enraptured by what we were doing that she made not a peep.  There was no wailing for “more tape” or “let me do it” or “it’s mine”, just sheer awe of what we were creating.  Her mouth hung open the entire time.  She carefully carried “big baby” back to her room and made a new bed for her.  My husband said that she pulled out “little baby” and placed her alongside – much like the two of us when together in my bed.

My daughter has been through quite a bit in the last 4 weeks.  We stopped nursing, her 2 year molars erupted, she decided she would not sleep in her crib anymore, became afraid of the dark, and came down with a virus.  This was all while we were preparing for my surgery. Post surgery I think she is doing beautifully.  She has attentive family and caregivers around to let her process as she needs to.  There is daily “Dr.” play with all of her stuffed friends.  She takes their temperatures, gives them shots and asks them to take deep breaths while her toy stethoscope dangles from her ears.  Deep breaths indeed. 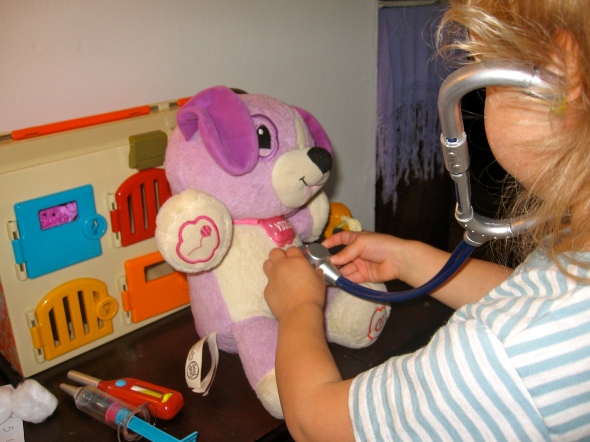