← Happy Holidays
Getting ready to roost →

The Burden of Restoration

We bought our home in “as-is” condition, a cash only sale because no bank would finance the property.  To our great fortune we found an angel to provide that cash, with an agreement that within two years I would pay them back with interest.

One year – almost to the day of moving in – we are completing a bank loan to honor that agreement, but in trading an angel for some bankers, I could not have fathomed the process, nor the word-smithing required, to meet bank standards.

At the earliest stage of the renovation we tore down the barn; too far gone for preservation, an easy choice, but we did keep a 200 square foot area that connected the barn to the Ell.  Nothing sentimental, it was a matter of necessity to have storage for the things and stuff of family life.

Our shed is quite old – tree trunks, with bark still on, function as studs – and it is not pretty: roofline sags, the only remaining shutter hangs forlorn from its last hinge, asbestos siding is missing in places.  At some stage I will take down the shed, and in its place erect a mudroom, second bathroom, and a bedroom for Becca and me.  And storage space.  But that is a project for some other season.

During the first year our focus has been the main house interior: to reduce the energy draw; to redo the plumbing, electric, kitchen, bathroom, and floors; to develop the garden beds for a permacultural homestead.

The timing of the refinance was an open question.  Last spring, when rates were incredibly low, I risked a meager appraised value because work remained unfinished.  The house was comfortably livable, but looked 90% done.

By early autumn, rates had increased, but my “punch list” was finished.  I felt optimistic.  Never could I have imagined the obstacle that would arise. 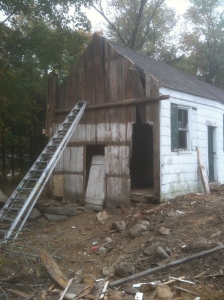 Twenty years ago I set out to work in “humanitarian finance.”  My goal was to organize a trust fund to generate cash, free and clear, for media-based community development projects.  Back in the Clinton era, end of the last century, the economy was roaring and people excitedly thought the internet would be a boon for democracy rather than commerce.  The future seemed bright.

While reading in a Law Library I came across the “Philanthropy Protection Act of 1995”, Public Law 104-61, which allows not-for-profits to manage investments outside the constraints of the Investment Company Act of 1940, which, just happens to be the primary source of regulations for the mutual fund industry.

I found a loophole.  Public Law 104-61 is not widely known.  When I contacted McDermott Will & Emery, a law firm which has the largest tax practice in the United States, they declined to provide advice because no one on their staff had any knowledge of the law and they “didn’t want to learn at my expense.”

Naïve and strong willed, I forged ahead into the deep waters of off-shore finance.

Within a few years we held in trust assets of various and unusual form: safe keeping certificates for 100 metric tons of gold bullion held in the underground vaults at Kloten, Switzerland; a rough-cut emerald weighing 1,000 grams; title to thousands of acres in Ecuador.

The more rare the asset, the harder it seemed to manage.  How do you establish a bankable value for a one-of-a-kind emerald?  And after Sept 11, the likelihood of insuring such an asset became virtually impossible.

The Trust Fund also held, in Swiss bank accounts, liquid assets.  Cash, the ubiquitous United States Dollar, caused the greatest difficulty when one of the bankers helped himself to the trust funds.  Humanitarian finance was an oxymoron.

That banker went to prison in Lichtenstein.  The Trustees, myself included, became Defendants in a lawsuit in a Federal Court.  Ultimately the lawsuit was settled, but I was forced into bankruptcy.  I have kept my distance since from the world of the glassy-eyed banker. 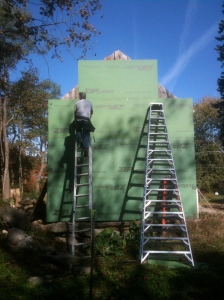 Coming into the refinancing my past was layered, but this is the means forward to secure this home and property for my family.  The process of restoration has been life affirming, and once I was ready for the appraisal, I began to see it as the last step in absolving the deep-rooted shame and pain from that debacle.

My credit scored well.  We locked in a good interest rate.  Only the appraisal remained.  We needed a value of $200,000.

The appraisal came in at $200,000 but subject to tearing down the shed.  Given that, the underwriter refused the appraisal, because that verbiage would not be acceptable to the secondary market.  We were dead in the water.

The bank asked about repairing the shed.  I made clear that would not be done before our interest rate lock expires, so that was a moot point.  The third option was to restate the value of the home excluding the shed.

Our home and the shed passed the City’s building inspection with no issues.  The home and shed are insured.  It seemed incredulous, but if one bank insisted the shed was an obstacle, why would any other bank see it differently?

The Loan Officer was highly motivated to make the loan and went to the Bank President.  The President, in turn, went back to the appraiser to appeal for a change of language.  The appraiser, to our great surprise, consented.  He changed his report.

Eighteen words made the difference: “the shed is not a safety hazard or concern.  Settling is normal for a building of that age.”  No repair needed, no tear down, no reduction in value.  Our home is now financeable.

It will be a meaningful personal victory when we close the refinance on 4 December, but our work of restoration has a long way yet to go.  The physical property may be the least of it.

The script of every life includes victories and struggles, and as a parent, my goal is to raise children not in the shadow of my circumstance but in resolution’s opening: healthy, intact, curious young souls able to explore, question, move forward without the baggage of their predecessors, the patterns of generations.

This burden of restoration reaches deep, and its ultimate measure will not be the financial, bankable asset, nor even the condition, of physical property, but the WHOLE self, the emotional, psycho-spiritual, playful aspects, that we nurture.

I had never seen it this way before, but through working to restore one piece of the earth, and to create a home and haven for my family, I have learned a new way to think for the second, let alone the seventh, generation.

6 Comments on “The Burden of Restoration”